Winter 2012/2013 MOTI (Museum of the image) organizes its first ‘I Love Breda’ photography contest. The theme is ‘What does Breda mean to you?’ and Gustave’s entry, Nieuwjaarsduik Wilhelminapark, is elected to serve as an eye-catcher in local newspaper BN/De Stem. 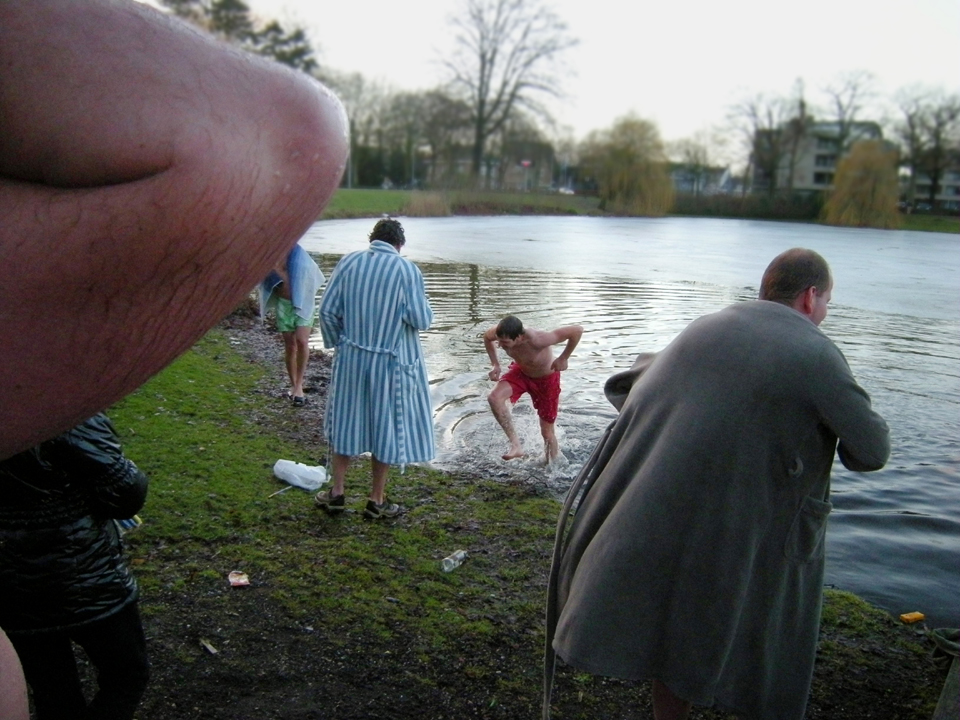 Breda has lots of events, I always go and have a look when it’s Singelloop for runners or New Year’s Dive for swimmers. I like to make photos and find street photography especially interesting: spontaneous images, always with people in it, and with something happening.
When I went to the Wilhelmina Park’s large pond on New Year’s Day 2011, I had my camera with me. I wouldn’t ever jump in that cold water myself, but I’m much enjoying the fact that there are people who do.
By the time I reached the pond, there was no-one around. I decided to do a lap around the water’s edges, and when I was on the other side, I suddenly saw people going in. I rushed back and got there just in time for a couple of photos, because most swimmers weren’t staying in longer than a few seconds.

For their Winter 2013/2014 contest, MOTI has the public elect an ‘icon of Breda’ from all entries. Gustave participates with Reigerstraat op Harleydag.

In the accompanying text, he declares ‘the whole town center’ iconic:

It’s a beautiful mix of old and new, and many folks can have a pleasant and interesting day there, for example during the last Harley Day, in 2010. That was a fine day to roam the town center. It’s a thousand pities that after that, for fear of problems, Harley Day has been outlawed. And fear, as we’ve all seen that day, is a bad counsellor!

His photo wins the professional jury’s appreciation. Quoting from the jury report:
‘Some entries excell in photographic quality, for example the one by Gustave Petit. A wonderful portrait of Breda’s inner city centered around a tough biker. Is it about the Harley, its rider, or our wonderful town center? Or about none of these? The photographer relates how Breda often allows pearls to go to waste. A thousand pities that there haven’t been any further Harley Days. Was it fear that acted as a counsellor? Because there haven’t been any iconic Harley Day events after 2010. The photographer is awarded a citation for this registration of times gone by. The award is for composition and overall image quality.’

His motivation, as in the above picture, reads: ‘Quaint little street with concrete houses pollard willows and most of all the stairs leading to an alley behind the houses of Baronielaan. This is where you can see why the neighbourhood is called “Zandberg” (Sand Mountain).’

Once more the professional jury agrees with the public, and from over 300 entries Gustave’s entry Zandbergdwarsstraat in Zandberg-West is elected to be Breda’s new icon.

Gustave readily admits that the photo ‘has been worked on’, but on his invitation to point out what has been photoshopped and what hasn’t, the members of the jury are unable to do so.